A Great Deal for your First Visit: $59 Cleaning, Exam & X-Rays

History of the Tooth Fairy 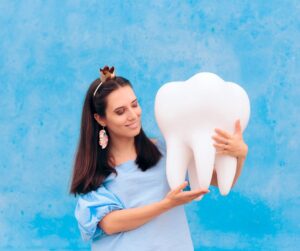 She’s a staple in most American households. If your child loses a tooth, it is safe to assume they will be getting a visit from the notorious tooth fairy. While she’s a sweet tale to tell to our kids, her history is less than a fairytale. We’re here to give you the real story of the tooth fairy, reader discretion is advised.

While no one is exactly sure where it began or why, the thought that baby teeth held magic or contained some sort of fortune began hundreds of years ago in what is now Ireland. According to the Irish myths, after a child lost their baby tooth, a magical creature would come and kidnap the child in the night, leaving a fairy in their place. The way to save your child? Bury their baby teeth the day they lost them. Creepy, huh?

A few generations later, the French and English had also developed a similar tradition. After children lost a baby tooth, they would leave a gift outside their door for a magical fairy. The thought was that this fairy would grant them a peaceful death and afterlife.

There is no logical reasoning as to why baby teeth were so highly valued, but even Vikings would carry these teeth with them into battle as a form of good luck.

The Tooth Fairy We Know

Fortunately, there is no creature that kidnaps our child after they lose a baby tooth, and our children typically are not worried about their place in the afterlife based on their dental health. Still, it is fun to know how the tooth fairy evolved since those Irish tales of olde.

The modern tooth fairy story we know and share with our kids comes from a play written in the 1600s called, “La Bonne Petite Souris,” meaning “The Good Little Mouse,”. In this story, a mouse would exchange teeth placed under pillows with coins.

The evolution from mouse to fairy can be blamed on Disney. In the late 1920s and 1930s, Walt Disney began bringing old tales of magic to life on screen. By the 1950s, the “Good Little Mouse” and the Fairy Godmother had melted together to form what we now know as the tooth fairy.

The Timeline of the Tooth Fairy

The Price of Magic

Her story has evolved, but so have her prices. With the latest inflation numbers being taken into consideration, each baby tooth is now worth approximately $4.03. Still want to stick with the quarter? Don’t worry, your secret is safe with us.

A Great Deal for your First Visit

Make an Appointment for Your Smile!